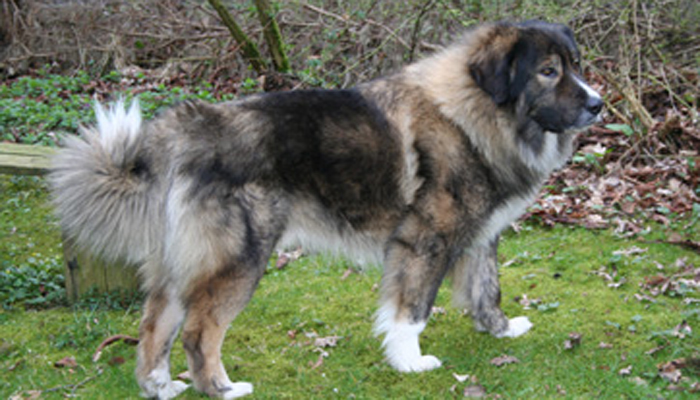 Inseparable companion of the shepherd and faithful flock guardian, bravely protecting it against predators and thieves. Wonderful farm and house guard, distrustful towards strangers and typically docile to its master.

Utilization: used as a watch and a guard dog for livestock, houses and a companion for people.

Brief historical survey: The Karakachan Dog is one of Europe’s oldest breeds. A typical Mollosus, created for guarding its owner’s flock and property, it does not hesitate to fight wolves or bears to defend its owner and his family in case of danger. Its ancestors started forming as early as the third millennium BC. The Karakachan Dog is a descendant of the dogs of the Thracians - the oldest inhabitants of the Balkan peninsula, renowned as stock-breeders, whom Herodotus describes as the most numerous people after the Indian one. The Proto-Bulgarians also played an essential part in the formation of the Karakachan Dog as they brought their dogs with them at the time of their migration from Pamir and Hindukush.
The dog is named after the Karakachan’s - nomadic shepherds of Thracian origin. Due to their conservative stock-breeding traditions, they managed to preserve some of the oldest breeds of domestic animals in Europe – the Karakachan sheep, the Karakachan horse, and, of course, the Karakachan Dog. It is with this name that the Karakachan Dog appears in the works of some of the classics of Bulgarian literature, namely Yordan Yovkov, Georgi Raitchev and Yordan Radichkov. In 1938 H.B. Peters wrote about it in the German cynologycal magazine. The first researcher of the breed was Dr.Todor Gajtandjiev, who proposed the standardization of the breed in the 1970s.
The Karakachan Dog’s bravery and dignity, together with its incredible loyalty, make this dog an invaluable friend and helper.

General appearance: A massive dog. Harmoniously and proportionally built. It looks impressive and powerful. It’s powerfully muscled, with bones that are massive but not coarse. Extremely undemanding and easy to keep.

Head:
Cranial region: The skull is broad and massive; the upper profile is slightly rounded with a shallow furrow on the forehead; the occipital bone is slightly pronounced. The supercilliary arches are only slightly developed. The axes of the muzzle and the cranial region are parallel.
Stop:Visible but not emphasized.
Facial region:
Muzzle: Massive, widening at the base, shorter than the cranial part of the skull. Tapering very gradually from its set to the nose leather, ending flat.
Nose leather: Large and well-pigmented. Wide nostrils.
Lips:Thick and close-fitting. The upper lip covers the lower. Well-pigmented.
Jaws (teeth): Strong jaws. 42 teeth 20 in the upper jaw and 22 in the lower jaw. Large and white teeth, well adapted to each other. Scissor bite or pincer bite.
Eyes: Small, deep and obliquely placed in the skull, with the lateral angles higher than the medial ones. Dark or hazel brown depending on the colour of the coat. The rim of the eyelid is dark pigmented. Expression is grim, confident, intelligent and firm.
Ears: Rather small, low set, V-shaped, pendant, close-fitting to the skull.
Neck: Short and powerful. Well-connected with the body and head. Angled at approximately 30o to the upper line. No pendant folds apart from a slight dewlap along the ventral part of the neck.

Body:
Upper line: Horizontal, straight.
Withers: Well-pronounced, long and muscular.
Back: Straight, broad and well-muscled.
Loins: Of medium length, broad, well-muscled. Pronounced above the upper line.
Croup: Of medium length, broad and slightly sloping. Rounded and muscular.
Chest: Deep and broad but not barrel-shaped. Reaching deep at least to the points of elbow.
Under line and belly: The belly is muscular, taut and slightly tucked up.
Tail: Not very high set. It reaches to the hock joints but can also be short by birth. The coat on tail is long and rough. In repose it hangs low or the tip is curved(Fig.2). In movement or when the dog is alert, it is carried over the back in sabre form or curled(Fig.3).
Limbs:
Forequarters: Straight, parallel, massive.
Shoulders and upper arm: Long and broad. Tightly joined to the body, well-muscled. Angle between shoulder blade and shoulder bone is approximately 105o.
Elbow: Close-fitting to chest.
Forearm: Long, with sturdy bone.
Carpus: Strong and broad.
Pastern: Slightly sloping. Broad and strong.
Front feet: Large, round, with taut, compact toes. Arched and well-haired. Elastic dark pads. Toenails are thick and strong, preferably dark-coloured.
Hindquarters: Parallel, powerful, with moderate angulation.
Thigh: Of medium length, broad, well-muscled.
Lower thigh: Long, broad and muscular.
Hock: Broad and taut. The tibial-tarsus angle is about 140o.
Hind pastern: Of medium length, massive, slightly obliquely set.
Hind feet: Longer than the front feet, with taut, compact toes. Often with single or double dewclaws. Good feathering between the toes
Gait/movement: Long reaching. Preferred movement is the springy trot.
Skin: Thick, elastic and closely-fitting. No flabs apart from a slight dewlap along the lower (ventral) part of the neck. The nose leather and the visible mucus membranes should be black-pigmented and for red-white dogs should be brown.
Coat:
Quality of hair: In terms of hair length there are two types distinguished:
longhaired – length of coat on the body should measure over 12 cm.
shorthaired – length of coat on the body, neck and limbs measures up to 12 cm.
Over the neck, withers, croup, at the back of legs, and on the tail the hair is long and rough. The topcoat is straight and stiff. Over the head and the front part of the legs the hair is short and close-fitting. Heavy undercoat.
Colour of hair: Two or tricolour, with spots. Most desired are clearly defined dark spots on white or big white spots on dark.
Size: Males: 63-75 cm.
Bitches: 60-69 cm.
Weight: Males: 40-55 kg
Bitches: 30-45 kg
Faults: Any departure from the foregoing points should be considered a fault and the seriousness with which the fault should be regarded should be in exact proportion to its degree.
- head insufficiently massive and broad
- pointed muzzle
- stop insufficiently pronounced or too prominent
- occipital bone too protruded
- eyes protruded or round
- ears set high or not close-fitting to the head
- lack of pigmentation
- neck long or too short
- prominent dewlap on the neck
- narrow or shallow chest
- soft back
- rounded back
- tail low set
- crooked legs, O-shaped or X-shaped
- pasterns too sloping or straight
- hock angles sharp or straight
- brindle coloration
- black mask